While hashtags on social media can be overdone commentary (#yolo, #blessed, #tbt) or topical aggregators (#poetry, #healthyrecipes, #diy), they also can give individuals access to an international dialogue about an issue they care about. The questions of what means to be patriotic, how we should protest injustices, and how we should express political discontent all were linked by one hashtag over the weekend, #takeaknee.

Why this is important is because our articulated experiences say something larger when they are aggregated with others in the public sphere. In The Public and Its Problems, Dewey states publics form when individuals gather to discuss adverse effects to government policies and activities:  “Indirect, extensive, enduring and serious consequences of conjoint and interacting behavior call a public into existence having a common interest in controlling these consequences” (126). One could argue that hashtags call a public into existence.

I would like to take a moment to highlight the variety of perspectives present, which enriched and deepened the conversation that began when Colin Kaepernick took a knee during the national anthem. Eric Reid, one of the first to join Kaepernick in his protest, stated in the New York Times, “After hours of careful consideration, and even a visit from Nate Boyer, a retired Green Beret and former N.F.L. player, we came to the conclusion that we should kneel, rather than sit, the next day during the anthem as a peaceful protest. We chose to kneel because it’s a respectful gesture. I remember thinking our posture was like a flag flown at half-mast to mark a tragedy.” The protest, of course, being against police brutality against African Americans.

This protest was partially reawakened by President Trump’s remarks at a rally in Alabama.

Of course, much of the contentious debate centered around using the national anthem and the flag as a means of protest. 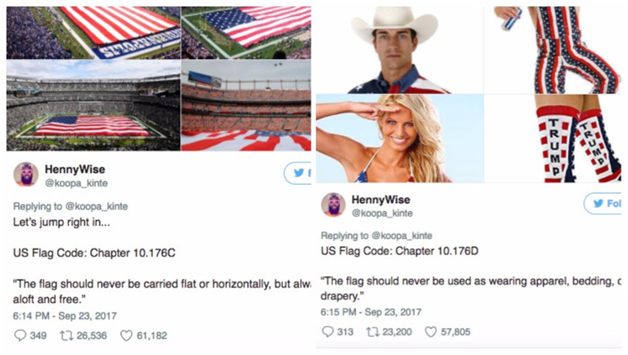 It also tied today’s protest other historical ones.

Many are "more dedicated to order than to justice," offended by kneeling during the Anthem & not by racism & modern-day lynching. #TakeAKnee pic.twitter.com/E23oM1ZW6X

It contained the voices of vets:

My grandpa is a 97 year-old WWII vet & Missouri farmer who wanted to join w/ those who #TakeaKnee: "those kids have every right to protest." pic.twitter.com/LurCj7SLUB

If we approach these conversations, not to reaffirm our own beliefs, but to listen to the varied experiences of others, we can deepen our understanding of an issue and develop a course of action or at least develop the empathy to have a meaningful conjoined conversation rather than isolate ourselves in echo chambers. Unfortunately, we are now hashtagging our filter bubbles and missing out on the true dialogue needed for a functioning democracy. In response to #takeaknee, the #IStand hashtag was formed.

#Istand for the Coffin flag on my wall! Eternal Rest Dad! #Thankyouforyourservice #respect

How blessed I am to be a citizen of this beautiful country. How great it feels to be reminded of it every day. #IStand #StandForOurAnthem pic.twitter.com/3skYJmxqio

This is how our little Maine Town shows respect for our flag and our Country! #IStand pic.twitter.com/60D6vJrRqg

When you look at these two opposing conversations together, I see the positives and negatives behind taking such a controversial means of protest. On the positive side, the protest has garnered much attention and it is a peaceful means of protest, as opposed to a torched march. On the negative side, it challenges a dogmatic belief, which people want to defend. And through their defense, their beliefs become further entrenched and the possibility for productive conversation lessens. This, of course, is frustrating.

We cannot ignore these conversations. My newly minted 9-year-old son came home from football practice Monday night scandalized by the actions of the NFL. Even at the third- and fourth-grade level, they play the national anthem before the games and stand respectfully. Rather than force my own perspective on the protest, I tried to explain both sides of the issue to my son, so that he could both understand his teammates desire to stand and also support those who may choose to kneel. At this point, I feel the most valuable civic skill I can teach him is to understand multiple points of view, not just mine. However, it can be difficult at times to listen in the inflammatory world of social media.

We begin our new media writing journey with blogging and Tweeting, where success hinges upon on our ability to develop a distinct voice, to identify our audience, and to network. For example, there are thousands of cooking and lifestyle blogs online. To standout you need a unique lens, a fresh perspective, humor, or an innovative approach. Consider one of the most successful examples of a cooking and lifestyle blog, Pioneer Woman, which led to a show on the Food Network. She capitalized on the fact that she lives a lifestyle that most of us can only imagine on a large cattle ranch in Oklahoma. It has humor, tradition, and cowboys. Of course, not all of us are willing to market ourselves and our lives in that much detail.

“In Confessions, I post photos of cows, horses, and my four weird children…as well as frequent shots of my…

In our New Media Writing class this week, we are preparing to enter the blogosphere. Part of that preparation involves considering the genre of a blog. As an introduction, we read Andrew Sullivan’s essay, “Why I Blog?”. When I first read this piece nearly a decade ago, I felt the wave of techno-optimism as a true public sphere emerged online where everyone could have a voice. Today, I feel less optimistic reading about the power of free expression, as we have become inundated with perspectives and have begun to treat all perspectives as valid, even those that perpetuate the oppression and the suffering of others. It’s become difficult for many to differentiate between fact and opinion, between well-reasoned analysis and false causality. Because of this, I believe we need to abandon our goal of speed when it comes to posting, commenting on, and sharing information online.

In his essay, Sullivan writes, “We bloggers have scant opportunity to collect our thoughts, to wait until events have settled and a clear pattern emerges. We blog now—as news reaches us, as facts emerge.” Having access to information at all times has created a world that is constantly being fed bits of stories, not just online, but on our 24/7 cable news stations. We do not need more truths that are likely to changes as details emerge. We do not need more cherry picked facts with commentary instead of context. What we need to do is redirect our attention to the longview, to the aggregated facts. Our attention drives the media cycle.

Our blogs can still be expressive and written in one sitting (ala Doogie Howser-style). However, when facts are involved, verify them. Proceed cautiously with emerging stories and new studies. Speed is not the ultimate value. Let’s approach blogging as an endurance sport.